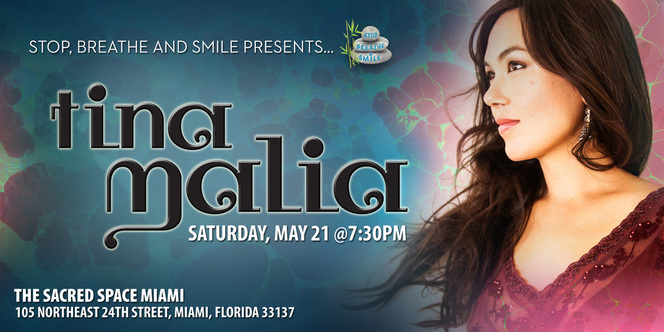 Music from the Heart of the World

Tina's mother, a renowned concert pianist and opera singer from South Korea, was the driving force in Tina's classical musical education.  It was her father, however, who bought her a guitar when she turned 15 and encouraged her to follow her musical passions.  "I remember first discovering many great women of folk music – Joni Mitchell, Joan Baez, Ani DiFranco, Alison Krauss.  Listening to them was basically how I learned to play the guitar, and it's also when I starting writing my own songs," says Malia. With guitar and backpack in hand, she began traveling the world and writing music, with her adventures in nature and spirituality inspiring her compositions.

Tina Malia is a beloved pioneer in a growing community of people around the world dedicated to residing in harmony with the Earth, and expressing it through art, health, education and music.  Her all-encompassing musical and spiritual perspective has led her to studio and live performance with a vast array of iconic artists including Kenny Loggins, India.Arie, Bonnie Raitt, Bassnectar, Deva Premal and Miten, Omar Faruk Tekbilek, Peter Yarrow (of Peter, Paul & Mary) Peter Kater and Joanne Shenandoah.  Tina's acclaimed catalog of self-produced albums include Shores of Avalon, Jaya Bhagavan, The Silent Awakening, The Lost Frontier and now, Bridge to Vallabha.

We’re so happy to share that the Tina Malia Concert will begin with a deep and soulful meditation guided by Suraj Datla who will be accompanied by Jorge Alfano on the Shakuhachi flute. <3

VISIT HER SOUNDCLOUD PAGE TO SAMPLE ALL OF HER MUSIC
CHECK OUT TINA'S WEBSITE!