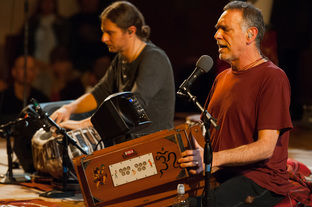 Krishna Das is the leading chant artist in the Western world. Armed with his trusty harmonium, he leads kirtans, where his chants create a rhythm that guides a group meditation. The chants, typically sung in Sanskrit, are based on mantras from the Hindu tradition - "Namah Shivaya" or "Hare Krishna" (as heard in the George Harrison song "My Sweet Lord") for example.

In 1970, KD's spiritual journey took him to India, where he studied under the guru Maharaj-ji (aka Neem Karoli Baba). In 1973, just six months after returning to the States, KD learned that his guru had died, and he went into a prolonged depression. It wasn't until the mid-'90s that he had an epiphany and was moved to chant with others. Turned out, he was really good at it, with a deep, resonant voice and a knack for making these ancient, Eastern traditions palatable to a Western audience.

His first album, One Track Heart, was released in 1996. It is a landmark, merging Hindu chants with modern production. Yoga teachers built routines around the songs; Sting practiced to it (and appeared on the next Krishna Das album). His following grew to include Rick Rubin, who produced two of KDs albums in the '00s. In 2013, he brought kirtan to the Grammy Awards for the first time, performing at the pre-show when he was nominated for Best New Age Album.

Humility keeps him from calling it a "Greatest Hits" album, but in 2015, Krishna Das releasedLaughing At The Moon, a collection of favorites. It's a great place to start if you're new to KD or Kirtan.
Map & Directions to the Wertheim Theater @ FIU
Click Here to Get Krishna Das Tickets