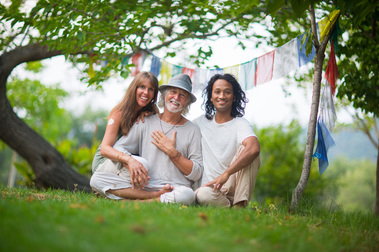 Taking the Temple to the Sangha 2016
Celebrated chant masters Deva Premal & Miten continue their ‘up-close and personal’ tour with five special evenings in the USA & Canada this September.
Accompanied by Nepalese bansuri maestro Manose, and Danish percussionist Rishi, their unique, spiritually inspired evenings of mantra, song, and chant bring solace and great music to thousands of kindred spirits, thirsty for respite in this troubled world.
These powerful gatherings create moments of what Deva describes as “ecstatic silence” – or in Miten’s words, “luminous pools of deep celebration.”
During their years together the duo have presented their music worldwide, from New York to Los Angeles, from Buenos Aires to Rio de Janeiro, from Moscow to Kiev to Tel Aviv, from San Quentin Prison to the concert halls of Europe, proving that mantras transcend all traditional cultural and religious boundaries.
Their groundbreaking 2015 release Songs for the Sangha debuted at #1 on iTunes and Amazon World Charts.

MITEN: “The music we make is born out of a committed spiritual practice. We meditate - we investigate - and our music is a result of that experience. It's more a case of life and death than entertainment.”

DEVA PREMAL: “Sanskrit mantras are ancient, primordial healing formulae that resonate at the very core of our being. By chanting communally, we access this profound depth of silence and inner peace, transcending all conflict - inner and outer.”

SAN QUENTIN PRISON INMATE: (after a concert by Deva & Miten and band) “I've been in here 25 years, but tonight I'm free...”

FACEBOOK POST: "It was magical in Tel Aviv...still is...I'm flying back to Eilat, full of love in my heart...going back and expanding love in my massage practice with your new CD...I was blessed with your hug at the end of the show...the mantras are in me...and please come back to Israel - I will always be there. Good traveling and bless Manose and all the children of the world. Thank you so much, something opened in me...I always saw the Arabs as my enemy...separate from them...did not feel good in me, I tried to understand but my heart was closed... after the concert I feel peace in my heart and hope for a good life for all of us. Namaste."

CANADA:
“I work with Autistic people and as usual I had my Deva Premal CD on and the young fellow that I work with (non verbal), heard Om Mane Padme Om and chanted it from start to finish. Now whenever he gets in my car, he automatically says, "three please" and puts it on. Your music has touched his Buddha nature and I feel truly blessed when I hear him sing along to it.”

EMAIL MESSAGE:
“There was a moment during your performance where it felt like every cell in my body was just vibrating so high and everything was moving "up" for at least a full half minute!  A shift like that is not rare for me but never before was it so distinct and so significant!"

FLORIDA:
"Thank you so much for your incredible music and energy. Your music is one of the few things my elderly father with Alzheimer's still responds positively to. I always play your CDs in the car when I've transported him to doctor appointments and he is immediately calmed and peaceful."

CALIFORNIA:
"I wanted to share something with you. I am doing radiation therapy for cancer and this week, one of the radio techs brought in one of your CDs, because she thought I might like to hear it during the difficult treatment time… Anyway, I thought you'd love to know your wonderful, uplifting and healing music is being played at California Cancer Care which is part of Marin General Hospital. BRAVO."

ECKHART TOLLE: “Their music is pure magic...”
CHER: “The Essence by Deva Premal is my all-time favorite album for yoga.”
ANTHONY ROBBINS: "Songs for the Inner Lover by Miten is a passionate and powerful work of art." 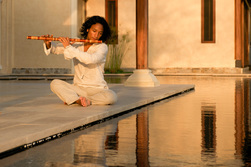 Manose was born in Kathmandu and began his musical journey with a rigorous training in classical Indian raga. Later he brought the sound of the bansuri to many musical genres, from jazz to Celtic to being a founding member of the most popular rock band in Kathmandu. Manose has performed extensively with Deva Premal & Miten and is featured on many of their recordings, including their new album, MANTRAS FOR LIFE.
www.ManoseMusic.com
This wonderful experience was held at the beautiful Olympia Theater in downtown Miami. 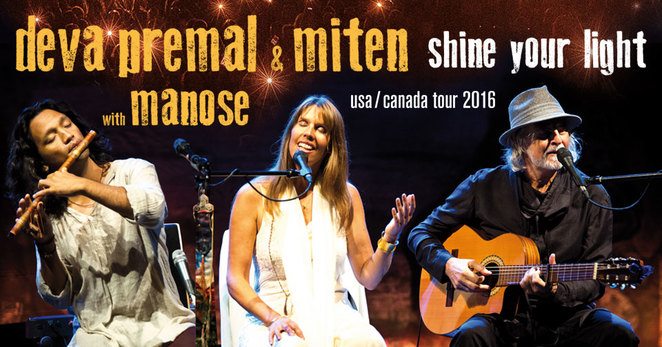